Reunited late '80s/early '90s San Francisco Bay Area funk-metallers MORDRED will embark on a U.K, tour in August. In addition, the band has launched an Indiegogo campaign to raise enough funds to cover tour costs as well as the expenses involved in releasing an EP of new material and reissuing the band's catalog, including making the "In This Live" video available as a DVD/digital download.

Says the band: "It's been a while... but we just jammed together in San Francisco over the summer and had an awesome time! We heard there was still a following for us; we had no idea! So we got the idea from a friend why not have some fun and tour again? Play for all our friends and fans old and new, and maybe even write some new songs. Of course, we'll be getting paid from the gigs and stuff we sell on the summer U.K. tour, but we need money now for things like promotion, paying someone to help us book this thing, merchandise up-front costs, 6 plane tickets, 6 visas, transportation, fuel, living accommodations the list goes on and on and on.

"We're also offering Indiegogo campaign perks only: handwritten lyrics, custom ring tonnes, Skype lessons from members of the band, we've got exclusive t-shirts, hats and hoodies, even original test pressings of Pause's scratch sample mix on vinyl we made especially for touring back in the day!

"And we've opted for the option to take the entire amount even if we don't reach our goal. So help the Bastard Son of Heavy Metal tour again; every bit helps! See you soon!!!"


Reunited late '80s/early '90s San Francisco Bay Area funk-metallers MORDRED will embark on a U.K, tour in August. In addition, the band will release a new single, "The Baroness", along with its back catalogue and "In This Live" video, which documents the 1991 sold-out shows at the Marquee in London. They will be made available digitally on August 11.

MORDRED has been on hiatus for a couple of decades and returns with the lineup responsible for "In This Life" and "Vision".

The band established itself as an impressive live act with its first show with POSSESSED in 1984 and looks forward to being on the road again.

"The land of kings is where MORDRED was born, so to us it's always been a blast to know that our greatest supporters are from there as well. We plan to party like it's 525 (A.D.)!" says bassist Arthur Liboon.

With their band name straight out of Arthurian legend and their musical style a genre-hopping mash-up of thrash seasoned with whatever flavors they like the taste of, it's safe to say MORDRED has never been afraid to challenge convention.
Read more at http://www.blabbermouth.net/news/reunit ... T6659GC.99


The influential San Francisco alternative thrash metal act Mordred have unleashed the music video for their new song “Demonic #7.” The clip, which was produced by graphic artist Andy Pilkington (Flotsam and Jetsam, Skindred), can be viewed below.

"Demonic #7" is the first taste of "The Dark Parade," Mordred’s first full-length album in over 25 years. Set to be released by M-Theory Audio on July 23, the record – which will be offered on CD, digital, cassette, blue vinyl with orange splatter and a limited-edition, mail-order exclusive white vinyl variant – can be pre-ordered now at smarturl.com/mordred

"Timing on the release of ‘Demonic #7’ comes at a point when the USA and many countries around the world seem more divided than they've ever been in our lifetime," explains guitarist Danny White. "As we begin to hopefully and tentatively emerge from the self-imposed cocoon of covid, we ask ourselves if things will start to get better, or will it be a case of just when you thought it couldn't get any worse, ’There are realms even lower than hell.’"

"Demonic #7" includes special guest Christian Powell (Othello’s Revenge), who plays guitar and contributed to writing. In addition, "The Dark Parade" features five-sixths of the personnel from Mordred's acclaimed 1991 record "In This Life," plus new drummer Jeff Gomes (formerly of Fungo Mungo and MIRV). The album is the follow-up to their acclaimed 2020 EP "Volition," and their first full-length record since 1994's "The Next Room." Outside of their 2015 single "The Baroness," "Volition" – which is available for purchase at https://m-theoryaudio.com/store – marked the first new Mordred music since the band’s 2013 reunion. The four songs on that effort saw the group return to the scene with a revitalized energy and successfully recapture their classic sound, which is rooted in thrash metal but veers off the straightforward path for more adventurous musical explorations by utilizing funk-infused musicianship and hip-hop influences. "The Dark Parade" is the continuation of the aural momentum that Mordred regained on "Volition" and showcases a band that sounds as fresh now as they did during their initial decade of existence.

Mordred was formed in 1984 as the burgeoning Bay Area thrash scene was beginning its rise to global prominence. While mosh-inducing thrash formed the basic blueprint of their sound, Mordred stood out as a unique presence thanks to their integration of alternative and hip-hop influences. The group was one of the first Bay Area bands to explore those diversities in extremes, but as the dexterous bass performance of Art Liboon and innovative turntable work from band collaborator Aaron “DJ Pause” Vaughn provided a new spin on the thrash metal genre, Mordred retained their metallic bark thanks to groove-laden shred from guitarists Danny White and James Sanguinetti and energetic shout-along choruses spearheaded by vocalist Scott Holderby. That combination of thrash metal and exploratory funk powered three full-lengths and an EP on Noise Records between 1989 and 1994: their revered debut "Fool's Game"; their eclectic sophomore follow-up "In This Life"; the "Vision" EP and their final – until now – record, "The Next Room."

In addition to spending their 2020 releasing “Volition” and putting the finishing touches on "The Dark Parade," Mordred also entertained audiences throughout the year with their streaming variety show and concert series, "Mordred: Acting The Fool!" Episodes from the series, which includes live performances by the band, guest appearances, burlesque performances, along with a healthy dose of sketch comedy and short films, can be viewed at https://www.youtube.com/mordredband/.

More information on Mordred and “The Dark Parade” will be unveiled by M-Theory Audio in the weeks to come, and by Mordred at www.facebook.com/MordredBand. 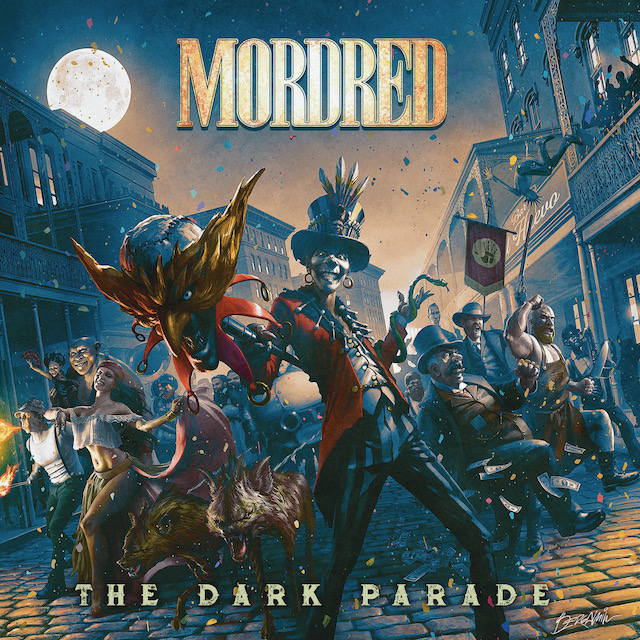