U.D.O : We Are One (avec Peter Baltes ex-Accept)


U.D.O., the German metal band led by former ACCEPT frontman Udo Dirkschneider, has collaborated with Das Musikkorps der Bundeswehr, the military band of the German federal armed forces, on an album called "We Are One", to be released on July 17 via AFM Records/Soulfood Music.

The LP contains 15 new songs that were developed and arranged by U.D.O. together with Lieutenant Colonel Christoph Scheibling. Two other former ACCEPT members, Stefan Kaufmann and Peter Baltes, were part of the songwriting too, as well as the German Armed Forces composers Guido Rennert and Alexander Reuber. The title "We Are One" has been the driving force for everyone involved.

Whatever anyone might think about the "rock band meets orchestra" collaborations that already exist in the music world, this is far from what "We Are One" really is. This is one of the most elaborate concept albums the market has ever seen. The hard-rocking sound of U.D.O. has not only been intensified by a 60-piece orchestra, but contains some unique arrangements that underline how characteristic yet versatile U.D.O. is.

This project surprises the listener in every aspect, and is a project with a clear statement: "We Are One" is a critical reflection of a world in which we all leave our mark, and in which we all have to show responsibility.

The songs on "We Are One" are about the different challenges we are currently facing, climate change ("Future Is The Reason Why"), the worldwide refugee movements ("Live Or Die", "Fridays For Future", "Children Of The World") or the pollution of the environment ("Mother Earth"). With the track "Pandemonium", both parties, U.D.O. as well as the German Armed Forces, also take a clear position against society's right wing. The song "Rebel Town" is a hymn for a 30-year-reunited Germany.

"We all live on this planet. No matter who we are or what we do, we all just have this one planet," Udo Dirkschneider explains about the message behind the songs. "There is no planet B. When I see the pictures of all the plastic in our oceans and when I hear about the next climate catastrophe in the news, I really start wondering how respectless and irresponsible we sometimes are. It's not just about us, it's also about all the others and last but not least about our children!"

This is a project that has made all participants think deeply about the challenges not only for the world, but for their own futures. For Udo Dirkschneider, "We Are One" is a dream that he has had for a long time. Since the show with Das Musikkorps der Bundeswehr in Wacken (2015) as well as the "Navy Metal Night" in Tuttlingen (2014), he fervently wanted to continue and grow the collaboration.

Scheibling also agrees. "All composers have done a fantastic job," he says. "The songs are excellent and really show the very best of orchestra and band. The album offers a variety that reaches from speed metal to classical metal, from ballad to funk style. As an orchestra, we brought in everything we could, a solo singer, a pipe, a drumline and some oriental percussions included."

Scheibling previously shared the stage with U.D.O. in 2015 in Wacken. "The motto back then was metal, mud and military music," he says, "An event that definitely awoke the wish to work together more intensely. Now our crossover project really finds its highlight with 'We Are One'."

"Several songs are pointing out the problems we have with pollution of our environment. We really have some heavy words about our global responsibility," Scheibling says. "Never before critical words against worldwide exaggeration of consumption or all this cyber insanity have been this loud. Never before the voice against protectionism, nationalism and against the right wing have been that intense. Let us join forces for a better planet! We are one!" 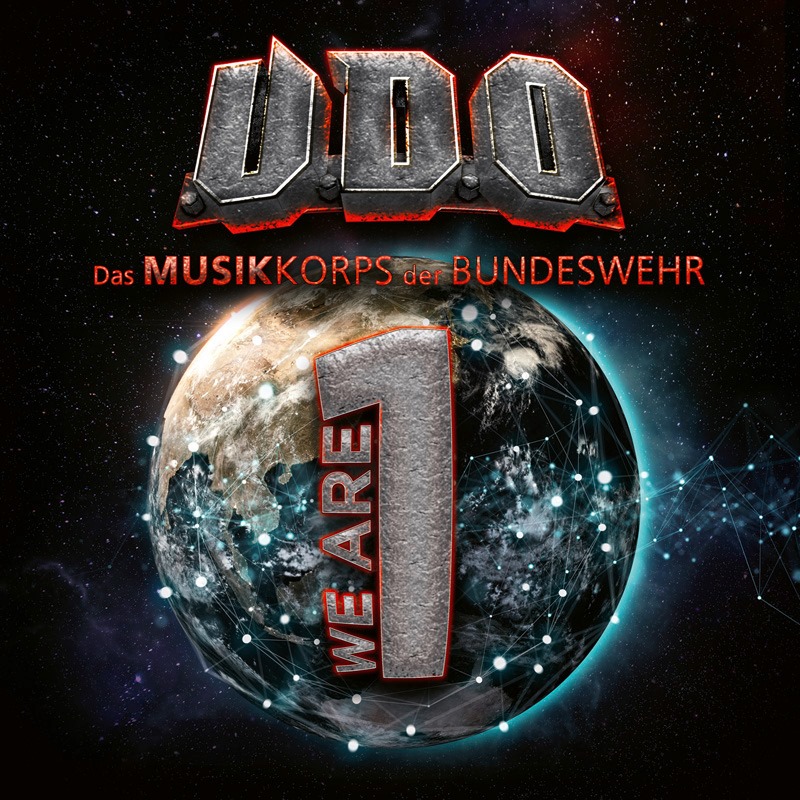 Bertrand
Defender of the Faith

the fab
Guardian of the Flame

the fab
Guardian of the Flame

Dark Schneider
Guardian of the Flame

Dark Schneider
Guardian of the Flame